After going head-to-head with six UK chefs, Piero Leone, Head Chef at the Royal Exchange’s Restaurant Sauterelle, has been named the winner of Seven Samurai Chefs, a nationwide challenge run by ANA and the British Hospitality Association (BHA), and judged in part by Japanese chef Yuki Gomi from Yuki’s Kitchen. 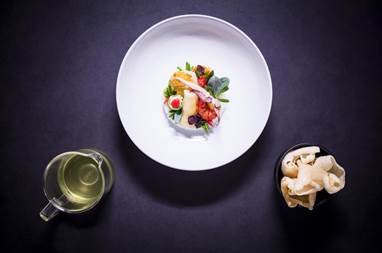 Challenged with creating a traditional Japanese donburi* for ANA, Piero’s winning dish, Donburi N7, made the best impression with the airline’s chefs, who judged the final round. Fusing his personal cooking style with traditional techniques and seven ingredients, including calamari, scallops, and prawns seared with a touch of sesame oil and ponzu sauce, the dish is packed with fresh flavours.

Business Class passengers flying with 5-star ailine ANA from 1 December will be able to enjoy it as a light meal. It will appear alongside others created by The CONNOISSEURS, a unique panel of leading culinary experts, including three Michelin star chefs Kunio Tokuoka, Executive Chef of “KYOTO KITCHO” and Toru Okuda owner of “Ginza Okuda”.

Akira Nakamura, ANA Senior Vice President, EMEA and General Manager, London told TravelPlus: “We were very impressed by the high level of creativity and skill that went into each of the finalists’ dishes, particulalry with how each one combined traditional Japanese ingredients with the modern style of Donburi.